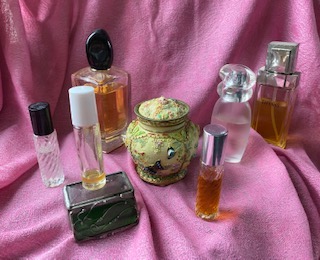 During my teens, twenties and thirties, I believed perfumes began and ended with patchouli. All other scents made me gag or crinkle my nose. I wanted to be a Chanel No. 5 Girl because I longed to become a woman as gutsy and groundbreaking as Coco Chanel, or the Girl who only wore Jontue by Revlon because I believed in the romance of the commercials. I thrived on fantasies in those days. Who am I kidding? Fantasies are my life. It’s the reason I get up in the morning— to create a life on the page intoxicating enough to forget my own.

Patchouli is often referred to as the hippie perfume because it supposedly masks the scent of pot. I didn’t find this out until I returned home for the holidays after my first term in college; the woman living there— my mother— ordered me never to wear it in her house, ever again. The thought of her daughter— me— being mixed up with drugs, sex and rock and roll was just too much to handle. I often wonder if she would’ve ignored my perfume preference if she’d known what was really coming her way, in regard to me and my life choices like working as a stripper— a post for another time.

My love affair with patchouli began long before I tried marijuana, or became known as the girl who could drink guys under the table. I loved it because it smelled earthy and woodsy, and I believed wearing it would allow me to morph into the character Alice from Alice’s Restaurant, or better yet, the free-spirited Holly Golightly from Breakfast at Tiffany’s. Did I mention my infatuation with fantasies? Patchouli became my identity and lucky scent. There were days I didn’t wear it, but I never went to an audition or ventured on stage without dabbing it on my wrists, behind my ears and where my cleavage was supposed to be.

It never occurred to me there were people who didn’t like it. Sure, my mother hated it, but she was my mother. She never endorsed anything in my life. Then one day I threw out my artistic sensibilities and embraced a nine-to-five existence by working in a dental office. To counteract the fragrance of gutta percha, bleach and rotting teeth, I often dabbed on patchouli in the morning. No one in the office said not to wear it. But periodically, patients would come into the office with horrible smelling perfumes. The dental assistants would go on and on about how awful it was, then ask me why I thought women wore too much perfume. My response: because when you wear the same perfume every day, the scent becomes undetectable unless you put on more than is needed. I’m often slow on the uptake, but eventually it dawned on me that this recurring conversation was how the dental assistants were letting me know they hated patchouli. So I went for long stretches without wearing it, and sure enough, on the days I did wear it that recurring conversation returned.

Holy Flower Garden, Batman! How could I have been so olfactory challenged to miss the intoxication of lavender, rose and wisteria? It was just like when I became a vegetarian. Once meat was out of my system, vegetables immediately became delectable— even the ones I previously hated like Brussel sprouts and peas.

What does patchouli have to do with writing?

Thinking about my obsession with patchouli made me realize how resistant I am to change. I love the idea of new experiences and new ways of doing things, but embracing the new isn’t second nature for me. Maybe because I believe if it’s not broke, don’t fix it is a saying for a reason. Or because organization is one of my strengths. I have a system for doing everything. As long as the system works why alter the process? But where would we be without innovation? Still sending letters by pony express? Doing so might’ve prevented the current mess in the White House, but let’s not go there. It took me six months to get used to paying bills on-line. The anxiety over setting up the accounts and trying to figure out a new system to keep track of when each bill needed to be paid nearly gave me a heart attack. But now, whenever my computer goes on the fritz, I panic about missing the next round of bill payments and fear my credit report will plummet.

I’ve come to appreciate adaptation. And after 2019 threw me the worst curve ball in my life, I wondered if my writing practice was in need of an overhaul. Not the doing of it. The part of showing up and scratching out clunky sentences on a daily basis works fine. No need to alter that, otherwise I might end up throwing out the baby with the bathwater. But I did need to unbox my comfort zone for sharing what I write with others.

And so, here I am with a website and a newsletter, and an Instagram account that allows me to stand up and cheer for myself as a writer. It’s an uncomfortable place to be. I’m much happier cheering and encouraging others to do their best. But I need to get over this fear of being rejected. Not because if I don’t, I’ll never get published. But because if I don’t, I’ll never discover how to share the deep unbearable truths of life that bring me to the page. I need to stop censoring. Need to say what needs to be said without apology. Need to say what needs to be said even if it doesn’t appeal to everyone. Because everyone isn’t going to read what I write anyway. Holy Lightbulb moment, Batman!

Patchouli reminds me of my resistance to change. I didn’t get into this racket of writing because I wanted to keep the status quo in my life. I wrote the first draft of my novel because I wanted my life to change. It did, one sentence and paragraph at a time. Frustrations and impossible challenges blindsided me again and again, and every moment of angst was worth it. I’m writing a memoir about that worth; and that process is leading to more revelations, which in turn is creating change in my life.

My favorite thing about a writing— the process of writing continues to evolve, just like life. Life is transformation, and I’m in it for the long haul.