The Bake Test for Writers 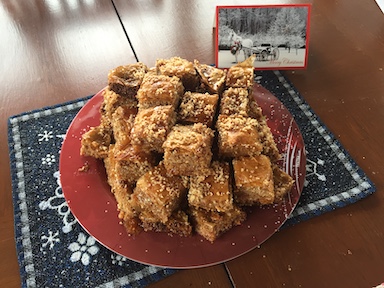 Rewriting and revision is a comfortable place for me as a writer because, once upon a time— I love saying “once upon a time”— I was an actress. My favorite part of acting was rehearsal. Performing was fun, especially when the cast turned into a harmonious ensemble, which was not always the case. But what I could count on as a performer was the rehearsal process. Hours upon hours, days upon days where nothing mattered more than figuring out the best way to embody the character’s physical and emotional landscape. Rehearsal was all about experimentation. Incorporating notes from the director. Incorporating the new break-throughs I made during my solo preparations. Tweaking to Improve was the goal. If I could’ve made a living as an actor just by rehearsing, I might never have left the theatre.

At the 2009 Surrey International Writers’ Conference, editor Lisa Rector presented a workshop— The Eleventh-Hour Checklist. Her bottom line was this:

If you’re questioning your story on any level, it’s not ready.

For a rehearsal-revision nut like myself, I was thrilled. And my diligence has led to better versions of several manuscripts. But over the last decade, I’ve often wondered if a writer can revise a manuscript to death. What if I never believe my manuscript is done? Will my obituary read: loving wife, mother, friend and unpublished novelist?

Recently, while working on the second draft of my memoir, I came across a post I’d written for one of my previous blogs. I love when my former Self comes back to council me.

I’m no Suzy Homemaker, but I can bake. I’m not a frou-frou French pastry chef with rainbow color frosting, and blooming flowers on cakes, and pie crusts that sparkle with sugar so fine it looks like fairy dust, and does anyone have a camera?

My baked goods are grandma good— tasty enough you must indulge in more than one serving. I bake for birthdays, holidays and the all-important tech week at the theatre department where my husband teaches.

For those who don’t know, tech week is the week prior to a theatrical opening. During this time the actors become acquainted with the technical aspects of the production. Lights, sound, costumes and finished props are all added, and adjustments are made throughout the week, so each element blends seamlessly with the play to form production magic. My plan was to make peanut butter cookies for the last tech.

Because college students love snacks, I always triple or quadruple the recipe and buy the ingredients in bulk. But when I went shopping on Friday and totaled the price for the organic peanut butter in my cart, I almost called 911. The brand names were given consideration, but after visualizing how much peanut butter I’d be dumping into the bowl, the generic won. How different could peanut butter be?

Peanut butter and all nut butters are one of my favorite food groups. I’ve been known to eat an entire container of peanut butter on a loaf of homemade bread in one sitting. Consequently, after thinking about baking cookies all week and meditating in the peanut butter aisle, by the time I got home I couldn’t wait to twist off the lid and have a scoop, or three. But when I did, my nose couldn’t find the peanuts. Still, I scooped and found no peanut-ty taste— no taste at all.

I wanted to run to the store and get the good stuff, but the weather was as yuck as the peanut butter. I also thought, maybe I wasn’t being fair to the generic brand. After all, my taste buds were organically spoiled. College students, who were used to less than the best in processed foods, might not notice. Plus, I’ve always been able to doctor up a bad recipe. So, when the first double batch came out blah, I tweaked the sweeteners and added chocolate to the second batch. Nothing helped.

Even my son, who can eat an entire batch of cookies before I can prep another tray for the oven, didn’t want anything to do with them. But. He also thought it was possible other people wouldn’t notice how bad they were. When my husband came home, he agreed. I packaged them up.

But when I came downstairs on Saturday morning something was amiss. I’d spent four hours in the kitchen the previous night, and there wasn’t a hint of baked goodness in the air. In fact, the air smelled like cold grease. I dumped every single cookie into the garbage.

My husband was flabbergasted and kept repeating how the students would’ve devoured the cookies. But from the moment the lid came off the jar, I knew the cookies were doomed. My instinct was spot on.

Sure, I wasted umpteen dollars at the store, and threw away four hours on cookies that ended up in the garbage when I could’ve been writing, but I learned something priceless.

The day will come when I know my manuscript is ready because my instincts won’t fail me. All I need to do is listen.

In 2010, I never imagined I’d still be listening in 2020. In my imagination, bookstores everywhere would have my books on their shelves, and readers would recognize me in on the streets thanks to the fabulous photo on the back of my book jacket— the actress in me was still alive at that time. The good news is, the instincts I spoke about have grown stronger. And as long as I keep showing up and trusting them, one day my manuscript will write me a letter.