My Month with Nora 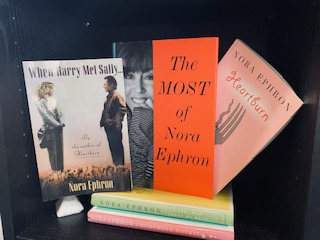 Here’s how it started.

My intention was to go to Inquiring Minds— the local bookstore— to order a couple books that will launch later this year and snag a book for a friend. I walked through the door and there she was— Nora Ephron. No flash or flurry. Just Nora with her big toothy smile, the dancing light in her eyes, and the hint of a secret she only wanted to share with me. That’s how I feel every time I catch a glimpse of Nora. She makes me feel as if there is no one else the in world she’d rather talk to than me; and we’ve never met, nor will we.

She caught my eye from the cover of The MOST of Nora Ephron. It was the only copy on the shelf because it was a used book. An incomprehensible thought— how does anyone return the work of Nora Ephron? But as soon as the thought appeared, a more important one slid into view. Her presence and the book’s exact positioning on the shelf was a sign, “like a little clue” just like in Sleepless in Seattle. The book was there for me. And so, I brought Nora home.

The MOST of Nora Ephron is a delightful cross-section of Nora’s writing, from her beginnings as a journalist, to her work as a screenwriter, playwright, novelist and essayist. Much of the material in the collection I read previously but, obviously, it was time for me to go once more into the world where “Everything is copy.”

I read the entire collection, and then went to my shelves and reread, When Harry Met Sally…, Heartburn, I Feel Bad About My Neck, and I Remember Nothing even though the novel and the screenplay were included in the collection along with many of the essays from her last two books. I read and reread because I couldn’t stop. It was just like when I open a bag of potato chips. I can’t do anything else until every last chip and crumble of a chip has been consumed, by ME. It’s why I don’t buy them. I’m a potato chip junky. And now, the month of January has proven I’m. Addicted. To Nora Ephron.

I don’t know why this surprises me. Her name is in the title of my memoir. But my guess is that the extent of my admiration couldn’t fully take hold until I was given this opportunity to read her work as she developed as a writer.

Here’s what I learned.

Nora was always Nora. But that plucky, be the heroine of your life, not the victim voice the world has grown to love was not always evident, especially in the years when she worked solely as a journalist. There were many times during the first hundred pages of The MOST when I wondered, “how much longer will this article be?” And then, in a Gypsy Rose Lee like flash there she’d be.

Moments like the above were what kept me going. The full strength of her voice came over time, seeping onto the page little by little. Her courage to share her personal take on the world came, I believe, with Heartburn— “a thinly disguised novel about the end of [her second] marriage.” The novel was when I really saw her look at the world through a camera lens that became uniquely hers.

At first I thought he was charming and eccentric. And then I didn’t. Then I wanted to kill him. Every time he got on a plane, I would imagine the plane crash, and the funeral, and what I would wear to the funeral and flirting at the funeral, and how soon I could start dating after the funeral.

From there, my laughter snowballed through her screenwriting and the stage play Lucky Guy and her blogging and personal essays. Each piece allowed her uniqueness to shine brighter. No one has ever made me laugh until I cry so hard my ribs ache the way Nora does. And it doesn’t matter how many times I reread. I crack up each and every time.

Here’s something else I learned. Nora rewrote many of her stories. How she came to be a writer, tales about marriage and divorce, and certain tales about her mother were events she revisited again and again. It’s not always a full-blown retelling. Sometimes it’s nothing more than a handful of paragraphs or a few succinct sentences. But no matter how many times I came across the repeated tale, I never once considered skipping over it. Whenever a previous event was retold, she delivered new insight because Nora was a different version of herself every time she returned to the story. That brought freshness to the storytelling.

More than anything else, my month with Nora showed me she was able to develop that unique quality we’ve all come to love because she was open and willing to challenge herself.

If I could rewind my life, one of the things I would do is put myself in the path of Nora Ephron. To witness the small courageous steps she took, one at a time, to transform her life from what could’ve been a heap-of-victimhood into Heroine. Her body of work is a record of that continual transformation.

“Everything is copy” because why the hell not?

I can’t think of a better way to come into balance with life than to pull it apart and turn it inside out on the page. That potential was what led me to commit to this writing life. And I’m here to tell you. It works. My memoir— the story of how I wrote and rewrote my first novel like I was eating a bag of potato chips— is showing me how I’ve transformed myself through the writing of fiction. Writing is Transformation. For the characters and the writer.

I’ve spent a month with Nora Ephron. It’s one of the best months of my writing life. I can’t thank her enough for catching my eye in the bookstore because she did have secrets to share. And I was ready to listen: Who you are as a writer takes time; taking the time to discover your style and voice isn’t a crime. Resist the need to rush into the next draft. Write something else. Experience more life. Then revisit the material and see how a new vantage point can help turn the material on its head.