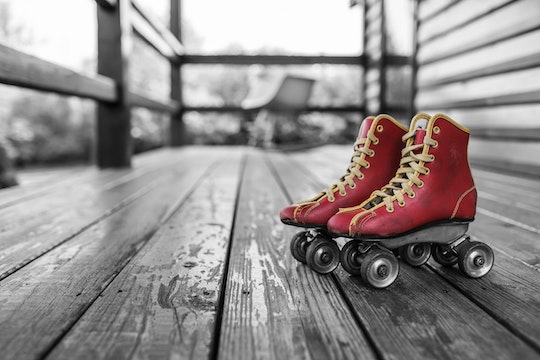 Movement was key, and the key was around my neck; that’s what extra shoestrings were for— skate keys. After eight hours at a desk, where the only activity was my pencil gliding haphazardly across the page to form letters and numbers I didn’t care about, I needed to move. Yes, I ate lunch and had recess outside— weather permitting— in a dress, which limited movement unless you didn’t care; I didn’t; I spent a lot of recess standing in timeout like Mount Vesuvius ready to blow.

Once home, I’d change into shorts and a sweatshirt and run outside with a two and half pound skate in each hand. The skates were metal in those days. Four heavy metal wheels were attached to a metal base where the soles of my sneakers would rest. My ankles were bound to the base by leather straps. The front of my feet were secured to the skates by clamps near the big and little toes and tightened by the skate key. Once clamped in, I’d raise each foot for a good shake. If the skates didn’t fall off I was ready to go, move— fly.

For someone who wanted to break free, and whose normal gait was to bounce along on the balls of the feet, my fondness for the weight of the skates seems odd in hindsight; yet, it makes sense. The weight of the skates connected me to the ground— not the soft give of earth or the bouncy uneven terrain of grass— but ground as in cement. In the 1960s, the cement of the world was rapidly expanding and wiping out farmlands in favor of four-lane expressways and neighborhoods with interconnected sidewalks. Cement was the ground of civilization, although, not necessarily civil as I would later learn. The skates’ weight also helped me focus on me. Clamped into heavy skates I had substance.

I grew up in a house where expectations were high, rules were rigid, and laughter was at a minimum. Personal views were not encouraged unless they aligned with those of my father, who ruled like a Spartan warrior. Over time I grew to appreciate the discipline of the Spartan mindset; it proved to be a valuable asset for the creative life I chose. But during elementary and secondary school, I found it oppressive. Roller skating was my way to break free.

Freedom began with the initial stroke of metal to concrete— a cymbal crash that lead to a continual wave of sound. The stroke of each foot was as hypnotic as the roll of the imaginary cymbal in my head as the wheels turned. The sound amplified with each tunk-shung-tunk of the skates gliding over the cracks in the cement sidewalk, and all the day’s expectations, failures, and even the hopes that could be dashed were erased.

Once I relaxed into the rhythm, my pace increased, and my heart and pulse accelerated. The internal rhythm’s harmony with the external percussion is what allowed me to connect to the person I was, separate from my family and peers. I wasn’t able to articulate this identity in words, but its power was palpable— I had substance; I mattered.

Each afternoon, I circled round and round the block until I saw my father’s car heading home; then I’d swerve into the nearest patch of grass, unclamp my skates, and walk to the same destination— reminding myself with every step that I mattered, and one day, I’d be free to explore what that meant.